Teaching Unplugged - Dogme in ELT - The introduction - Interrogate your books 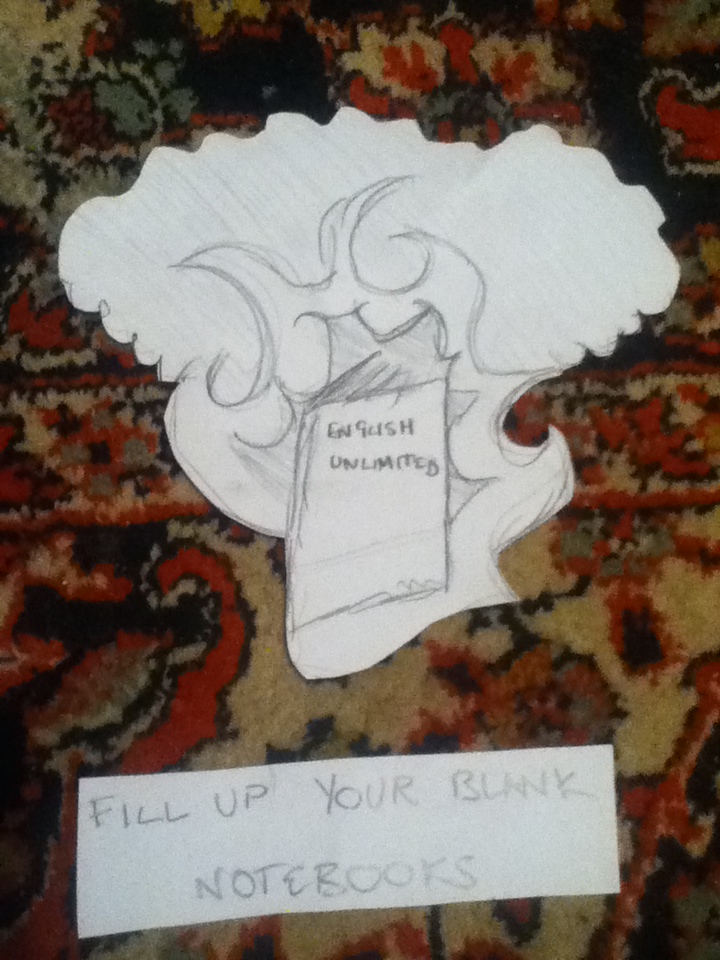 So what's it about? Dogme! I was vaguely familiar with Dogme 95, Lars Von Trier, Danish Cinema, rules regarding cameras and lighting and such, making movies that aren't enhanced by a musical score, that don't use externally applied visuals or audio. They were keeping it real, showing life how it was and not bowing down to false and dishonest tools of audience manipulation that detracted from or illegitimately enhanced the drama.

So I guess the name Dogme in ELT carries the name as it too REJECTS SUPERFLUOUS THINGS that have leeched onto and apparently seem inseparable from the pure art of teaching like a SYLLABUS and COURSEBOOKS and, to a degree, the fixed roles of TEACHER and STUDENT. Coursebooks stand in the way of the learning process as they rely on notions about education that don't stand up to modern ideas about language acquisition as well as being the seemingly innocuous propaganda for the cultural norms of the consumerist, capitalist West.  Scrap 'em. Keep that ELT classroom pure and simple and learner driven.

So, what's the introduction banging on about? Throw your books away? Have you lost it, I need those!
Well. Most generally, the authors Medding and Thornbury believe that coursebooks rely on the MATRIX MODEL of learning. You know, where Neo goes into that Judo room and they upload knowledge and then he suddenly knows karate, and the same with Trinity and the helicopter. Applying this model in the ELT classroom means that the coursebook is contains all the knowledge that needs to be transferred, and the students are empty receptacles, depositories to be filled up. The status quo does recognise the need for a lot inbuilt practice / recycling / and communicative activity. However, everything, ultimately, is geared around learning grammatical structures. Some of the time you might as well give students English Grammar in Use, so transparent are the coursebooks' attempts at "hiding" the learning and so little are the content of the texts tapped and explored. Look at content pages of books and they're still divided up into grammar and vocabulary sections which are the parts we consider the most important, the least sacrificible, basically, these fill the bulk of what we test.

You may ask, "yeah, so what. We need to cover everything on that syllabus, and students get adequate practise and opportunities to produce the target language. So what's the friggin problem???"

Well, the problem, right, is with this sentence : "here is your schedule, you need to cover this syllabus ".
Covering a syllabus involves carving the language up into pieces, and then handing it to the students, making it easy to swallow. But we're not asking if the students want it, if they're hungry, seriously gals, I've handed 3rd conditional potato pie to my teenagers and they vomit it up most of the time, and if they do learn the rules, even fewer can produce it adequately. Language is living, and the skill exists in using it, not knowing it somewhere in the back of your head or having it written it down in your scruffy notebook.

You need to "uncover" the syllabus based on mutual co-operation between teacher and student in a dialogue that involves engaged discussion on themes and topics chosen with the consultation of the learner. Students receive input on a topic, they get opportunities for output, and the teacher listens to the students output, the teacher focuses on what the students are TRYING to express, what they WANT to express, and the students are EXPERIMENTING and COMMUNICATING (not producing!) and the teacher then provides feedback, correcting students' accuracy problems or some useful language that better expresses what they want to say. Then this is the Ts most "teaching" moment. But the majority of the time the teacher is "scaffolding" the students, allowing them to ACTIVATE their learning capacities organically from the bottom up.


If we really had communication as the key objective, a syllabus would be thematic with no set grammar or vocab attached to each unit. It would be there of course, but it's only explicitly brought up when the students are receptive to it, when they need it. And in a class students are all thinking about different things and may be concentrating on different areas of production, so in one class you may cover a number of different structures or idiomatic phrases.

Of course, a lesson that goes by the book isn't necessarily preventing students to learn language. They still, hopefully get input, output, feedback. There is a spectrum with a total "hegenomic teacher" on one end, and the collaborative dialogue on the other. But coursebooks are designed with the principles that push lessons to the former, and this is why we burn books. Education is a dialogue. Education is conversation. Education is not following a code and it's not covering a linear syllabus.

There is a second, political reason for not liking your coursebook too. As mentioned above, the topics and themes that exist in a textbook are not specifically tailored for your students. Apart from Business English and ESP, it's seldom that you will consult with your students about what they're interested in doing with their English skills, how and where they want to use it, how it can relate to their lives. Instead, we use books that are produced by ELT publishing companies and the same copies are sent out all round the world. This has a number of consequences. Firstly, the topics might just be boring for your students, like really really dull. Every teacher knows the feeling that books are often dull, tedious and hardly ever "speak" to the students.

More pertinently, they contain a whole load of values and subtexts. What we are doing when we teach people Engish is that we are spreading not only a linguistic skill, but familiarising students with and promoting certain forms of culture and knowledge, namely pro-western, capitalist and neo-colonialist. Books aren't propaganda, but they are not neutral, and embody certain values. Sounds oppressive right? Well, it is, on an ideological level, but not necessarily oppressive to the students in the classroom, an extremely common reason students come to my classes is for work. They want to participate in the international business community, they don't want to play their small part in the international "fair" of a globalized free market. Granted, I've only ever taught in countries that have already climbed and kicked away the ladder, so a lot of my students have much to gain.

Remember before we were talking about how textbooks rely on the MATRIX MODEL? Well, we're not only uploading language data, but also a set of values that normalizes the values of the authors who reflect the values of their surroundings and replicate the systems that they participate within. Jeez, what I wouldn't give for a book that had a feminist, good-night-white-pride, anti-border, anarchist, queer-power, vegan-reich agenda.